Now, I'm sure some of you are scratching your heads, asking "What the heck is she talking about?" Well, since I gave up bread for Lent, getting healthy carbs in has been a priority. So, I came across Organic  Forbidden Rice (click here to read up on all of the healthy properties). The rice is dark purple, which I thought was really cool. It tastes great and is an alternative to plain ol' white rice.


Something else I'm a fan of? Rice pudding. My dad makes the best rice pudding, which is a secret family recipe, so I won't be blogging that for the world to see.


When I was making some rice this morning, I noticed that the vanilla soy milk I bought last week was going to have to be tossed in a day or two. Erich doesn't drink it, so if I don't have it daily, it goes to waste. I decided to try something I have never tried before - rice pudding with soy milk and forbidden rice. I figured, even if it didn't come out as I had planned, it would still be pretty delicious for breakfast. I'll walk you through how I made it, with some fancy pictures. 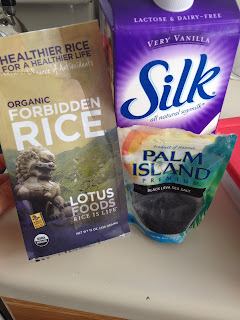 First things first: quickly rinse your rice. Put into a decent sized pot, and toss a cup of water in. While the rice sits in the water, grab out your milk and salt. Toss in the salt, then measure out the milk. Give a quick stir and turn the stove onto medium high. You will notice that the water is going to turn a grayish purple. That is going to happen. Once the mixture starts to bubble, turn it down to medium. 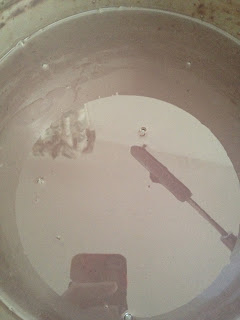 This is very important. You need to stir this frequently, so don't leave the kitchen. For some reason, using soy milk makes the "skin" on the top of the milk quicker than regular milk, so you gotta stay on top of it. This is one of those times when that ridiculous Robostir that they sell at mall kiosks would come in handy. This is going to take around 40 minutes. If you want to check the rice's progress along the way, scoop a grain out and taste it. When the rice is done, move to part of the stove that is cool. While this cools, go and measure out some honey. 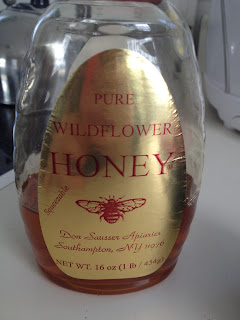 I used 1/4 cup of honey, but if you want, only pour half of that in, then taste it. I used a lot, because Erich has an extreme sweet tooth. If I were to make it again, I would only use half. You can always add more in, but you can't take it away. It was still good with the amount I used, but I won't be able to eat as much - that is probably a good thing! 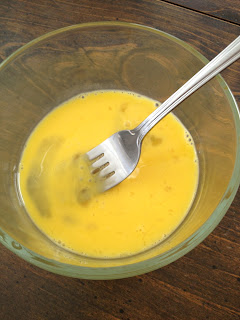 The next step is important - you need to beat the egg in a separate container. When you are ready, slowly pour the egg in, while quickly stirring the rice mixture. You don't want scrambled eggs in your rice pudding. After the egg is in, keep stirring for another thirty seconds - make sure its incorporated. 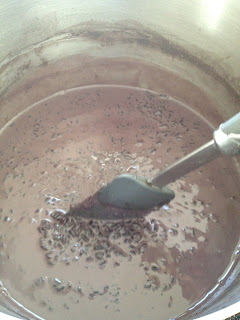 Now, toss the teaspoon of cinnamon in. Stir until evenly distributed. 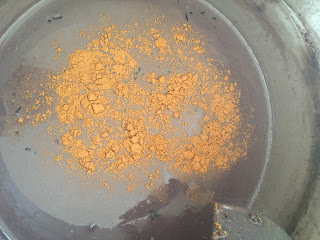 When you are ready, transfer the rice pudding into a glass dish. Let cool for a bit, then refrigerate for about eight hours, to thicken up. I can only eat rice pudding cold, but if you prefer it warm, I suggest using two eggs instead of one. I like my rice pudding ridiculously thick, so I am going to do this on my next batch. This is what the rice pudding looked like, eight hours after I made it. 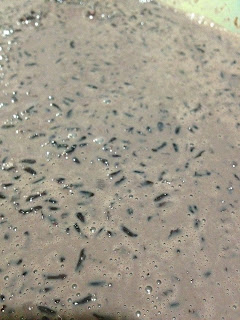 I was hesitant to try this, because I didn't want this to be a flop. I took a bite, and I was pleasantly surprised. Its really yummy! As I mentioned earlier, next time I'll cut the honey in half and add an extra egg, but thats based on my own personal preference. When it comes to rice pudding, I think it tastes better the second or third day - I feel the same way about pulled pork, too. 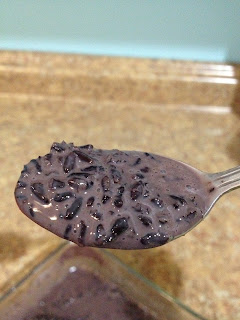 If you want, feel free to add in some raisins, almond slices, or pistachios. I tried a scoop with a pistachio on top, it was delicious! 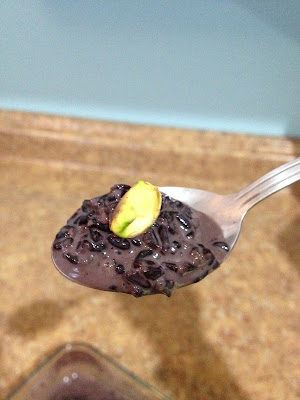 Feel free to use whichever type of milk you like - if you aren't using a milk that is vanilla flavored, make sure to add a couple teaspoons of vanilla extract. If you have any questions, comments or suggestions, feel free to ask away!