After spending more time than necessary on Pinterest, I decided to embark on a cooking experiment. I'm not a bad cook, I just don't cook as often as I'd like. When I was juggling, work, school, and academic fieldwork, it was much easier to run to one of the local businesses in the area and snag something delicious. As I feasted on roast pork chili verde (layered in soft corn tortillas, with cheese, lime cream, and topped with slices of artichoke and fresh cilantro) from one of my favorite local restaurants, Salsa Salsa, I decided that I would try to make pulled pork. I had been telling Erich for weeks that we needed to make a trip to Bobbique, which is my favorite barbecue restaurant on Long Island, but since I need to pinch pennies, eating out is a luxury.


When I told Erich what I planned on making, he said, "Are you sure you know what you're doing?" I scoffed and replied, "Of course I know what I'm doing. Just because I don't cook, doesn't mean I don't know how to." In the two years we have dated, I think the only food I've actually made for him has been scrambled eggs, veggie burgers (microwaved, because its quicker), and homemade chocolates. Now, his former vegetarian girlfriend was proclaiming she would make meat. You too would be leery of this claim. As he went back to nerd-talking with our friend James on their online Star Wars game, I kept browsing recipes. I didn't want to use anyone's specific recipes, but I needed a general idea on HOW to cook the meat. The most fool-proof was seemed to be in a crock pot.


I have never used a crock pot before (even though I've owned one for months), but I figured this would be pretty simple. When perusing recipes, I realized that while pulled pork is delicious, a lot of these recipes were really unhealthy! A fatty cut of meat, copious amounts of bottled barbecue sauce, and enough sugar to induce a diabetic coma. Uhhhh, no thank you. So, my search continued. After looking at dozens of recipes, I formulated my own. Its super easy to make and tastes delicious!

First, take the pork tenderloin and cut into thirds. Place into a glass dish. Take the paprika, salt, light brown sugar and garlic powder and mix in a dish. Evenly distribute the seasoning on the meat, lightly patting it (don't rub it!) onto the meat. Toss into the fridge to hang out for a few hours. Do some laundry, bake a cake - whatever floats your boat. It can stay in the fridge overnight too, so if you want to do this the night before, feel free.

When you're ready to make the roast beast, take the pork out of the glass tray and place into the bottom of the crock pot. Now, because I knew this would cook in a crock pot for awhile, I didn't worry about cooking the sauce on the stove to simmer and thicken. Put the dry ingredients in first, followed by the wet.  Make sure the pork is covered with the wet ingredients before turning the crock pot on. Turn on high for 4 - 5 hours or low for 8 - 10 hours.

After the meat has finished cooking, use tongs to remove the pork and put into a glass dish (you will use this to serve the meat, so make sure its large enough to hold the pulled pork and the sauce). Shred the meat with two forks. Do not use your fingers, because the meat is hot and you will burn your fingertips. I learned this the hard way. Once the pork is shredded, pour the sauce from the crock pot onto the meat. Use tongs to evenly distribute the sauce on the meat. 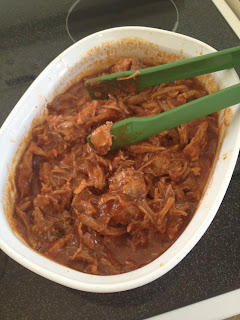 You can serve the pulled pork on a hamburger bun, with cornbread, or on a bed of rice. Refrigerate leftovers. 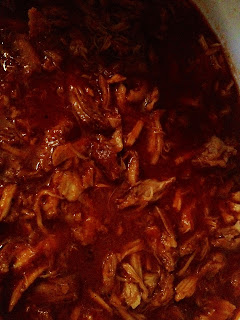 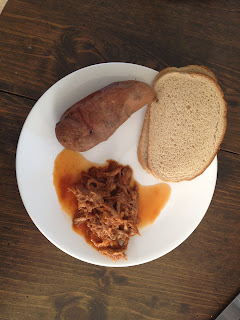 This might sound odd, but this actually tastes better the next day! Just heat in oven on 250 in a glass dish, covered with aluminum foil. Stir occasionally until desired temperature is reached. 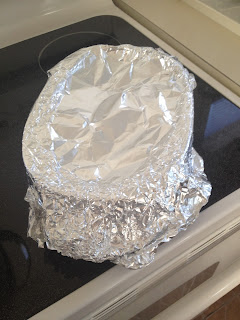 *If you want to use this sauce on ribs, burgers and the like, you need to combine the ingredients in a pot. Bring to a boil, then lower immediately. Let simmer for about thirty minutes, stirring often. When the barbecue sauce is done, pour into a glass dish. Once it has cooled, store in the refrigerator until ready to use. Use within three days.

If anyone has tips or variations, let me know! I'm open to all suggestions.