Danielle over at Sometimes Sweet (which happens to be one of my favorite blogs) participated in 11 things, and tagged her readers, encouraging them to do the same. I figured, sure, why not? I'm pretty new to the world of blogging. I've conversed with a lot of wonderful people so far, and this is what we would call a "community building exercise" in the land of teaching. Here goes nothing!


There are five rules:
1. Post these rules.
2. Post a photo of yourself and 11 random things.
3. Answer the questions set for you in the original post.
4. Create 11 new questions and tag people to answer them.
5. Go to their blog/twitter and tell them you've tagged them. 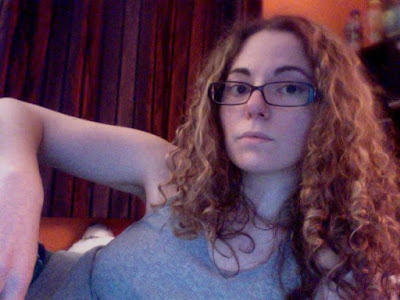 01. I have a bizarre number OCD, which began after I got in my first car accident, back in 2006. Anything that displays digital numbers, that is within my control (radio volume, washing machine, alarm clock, microwave) has to go up in fours, starting with zero. The only exception to the pattern is the number four. For example: 0, 3, 4, 7, 11, 15, 19, etc. Alarms are more complicated. They have to be set with the hour and minute at those specific numbers, PLUS all of the numbers have to add up to one of the numbers also. My boyfriend hates this, because if I need to be up by 8:30a, my alarm will actually be set for 8:07a, because that adds up to 15. Once I fall asleep, he usually changes it. I don't care that he does it when I'm sleeping, but if he does it when I am awake and I can see it, I get really anxious and have to change it.

02. My first, middle and last name each contain seven letters, made up of four consonants and three vowels. I realized this about three years after my OCD with numbers began.

03. I was almost named Dale, after Roy Rogers' wife, Dale Evans. This was my father's idea. My mother's name of choice was Celeste, but it reminded my dad of Mama Celeste, the lady on the pizza box. When he suggested Michele, she agreed, but it couldn't be spelled with two L's. Same thing with my middle name, Jenifer. I think my name is pretty rad - thanks, parental units!

04. If I could only participate in one form of shopping for the rest of my life, I would be perfectly content grocery shopping. Grocery shopping is an art. I prefer going alone, because I take my time reading labels, checking out new products, and Googling recipes/facts about foods I have never seen before on my iPhone. The only person I have been able to grocery shop with is my friend, Liz. She's a label reader, too. We have been going after running lately, and I really enjoy it.


05. Back in 2009, I was in my Economics class, and shown this video on Democracy Now!, regarding the student loan crisis. After speaking with my professor, I decided to call Reverend Jesse Jackson's office to inquire about his Reduce the Rate student loan campaign. Long story short, I met with RJJ and his team in New York, was on his daughter, Santita's radio show, flew out to Chicago to do a few television tapings, and got petitions with thousands of signatures from my college campus. This was probably one of the coolest experiences I've had. I met a lot of students my age from around the country, I saw Chicago for the first time, went to my first basketball game, and got to see what RJJ does. He is a super busy dude, but always takes time out to talk to people. We would be out to dinner and people would just come up to him. He wouldn't mind being interrupted, and would ask these people about themselves. When I called home to speak with my mom, he asked to talk to her, and to say what a great person I was, and that she had raised me well. He's an awesome person - if you ever see him out in public, go say hi. Tell him I sent you, haha.


06. When my boyfriend, Erich, first asked me to hang out, back in October 2009, I kept blowing him off. I liked him, but I was afraid of getting close to him, fearing he would eventually break my heart (the boy I had loved before had ripped my heart to shreds not once, but twice in a two year period, after ten years of whatever it was - we still can't classify what the hell we were to each other). After realizing how happy Erich made me, and the effort he was putting in to try and win my trust, I decided that I needed to go for it. That was one of the best decisions I have ever made, and I'm glad he didn't give up on me.


07. In high school, I played french horn in symphonic band, trumpet in jazz band + mellophone (marching french horn) in marching band. I was pretty decent, and received a full scholarship to the college in my town. I blew my scholarship, because I stopped going to class. My parents had just split up, my mom had remarried within a few months + my ex-boyfriend had just died of cancer. When you live in a small town, people talk + ask too many questions, which is not what a seventeen year old wants to deal with. I was severely depressed + slept so much that my mother took my bedroom door off the hinges, so that I would be forced to have human contact.


08. I would love to become a yoga instructor, but in order to do so, one must attend yoga classes regularly for 2+ years before you are even considered to enter the program. This takes money I definitely don't have, so unless I win the lottery, it probably won't happen.


09. When I thoroughly enjoy a book, I will stay up until the wee hours, reading as much as possible. Whenever a new Harry Potter book was released, I would request that day off, and the next day off, too. I would go to Barnes + Noble in the morning to fetch the book, grab coffee, then come home to read. I would only get up to make more coffee, grab a snack, or use the restroom. Sometimes I would stay up for nineteen hours, to get most of the book finished, then pass out for a few hours, to wake up and finish the book. I got into The Hunger Games series a bit late, but I would stay up until Erich would take the Kindle out of my hands, telling me I needed to get some sleep. I love getting lost in books, its my favorite way to spend time.


11. I have worn glasses since the age of three. I am far-sighted in one eye, near-sighted in the other (don't ask me which, because I have no clue - my vision sucks hardcore when I don't have my glasses on). I have tried contacts a few times, but putting a foreign object into my eye was revolting. Plus, I think I look pretty darn cute in glasses, and they keep things from flying into my eyes.

01. If money, schooling or time was no obstacle, what career would you choose?
I would love to be a pop culture historian, a writer for a well-respected publication, and a yoga instructor.

03. What is your number one, all-time, favorite blog?
My loyalty lies with Mario Lavandeira, better known as Perez Hilton. I don't watch reality shows, so this is my pop culture guilty pleasure.

04. Biggest online pet peeve?
Grammatical errors. I don't care if you write in uppercase or lowercase letters (I prefer all lowercase, but for blogging, I try to keep it as professional looking as possible), but when people mix up "there, their and they're," it drives me crazy.

05. What is your all-time favorite book?
Ooooh, this is difficult to answer. Going with a childhood favorite - Ramona Quimby, Age 8.

06. What would your "last meal" be?
Mac + cheese from Grey Horse Tavern, Filet Mignon from Teller's, and Carvel chocolate soft serve in a cake/wafer cone.

08. What would your ideal Sunday morning consist of?
Sleeping in (with no alarm set), enjoying a late breakfast at the Cookroom, and spending the rest of the morning at Barnes + Noble.

09. Why do you blog?
I choose to blog because I love to write. After losing my job, I didn't know what to do with myself. My mother, who has always told me that writing is my calling, told me that I needed to get back into writing. I figured a blog would be a great way to do so. I could write on various topics, read what other people had to say, and engage in conversations with people who I only know in this little blogosphere. I must say, even though I am not earning an income writing, this is the best job ever!

10. If you had to choose one color to wear forever, what would you pick?
Black.


Questions for the bloggers I am tagging:
01. What was the first album you owned? Don't forget to include the format (vinyl, cassette, CD, etc.)!
02. As a child, what was your favorite Saturday morning cartoon?
03. Do you collect anything?
04. Which person has been most influential in your life?
05. What is your greatest fear?
06. If you could vacation anywhere in the universe, where would you go?
07. What is the first part of your body that you wash in the shower?
08. If you could spend the day with any one person, alive or dead, who would it be?
09. Are you a Mac or PC person?
10. Do you have any tattoos?
11. What was your childhood nickname?


I am tagging Aileen, Amber, Ashley, Callie, Corinne, Don, Linsday, Lori Lynn, Roxy, Sarah-Anne, and Sarina. If I did not tag you, I still think you should participate! Leave me a comment once you have filled it our on your blog, so we can all learn a bit about everyone else!
Posted by Unknown at 4:37 AM