Speaking Words of Bueller, Look Around.

I was singing The Beatles' "Let It Be" as I was trying to figure out what title to give to this post. 30% cheesy, 70% clever. In all seriousness though, part of Broderick's monologue from Ferris Bueller's Day Off has popped up on multiple occasions as of late.


When I opened my Erin Condren* monthly planning notebook upon arrival, this was one of the first pages I saw: 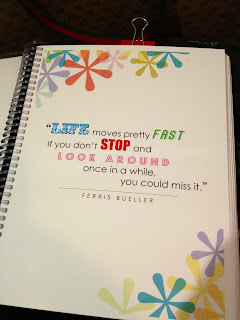 During Super Bowl XLVI, Honda aired this commercial for their 2012 CR-V, in which Broderick pays homage to the genius John Hughes flick that helped escalate his acting career:


The quote also popped up while I was perusing the internet, trying to find the perfect quote to place on the front of my notebook (I wound up going with an excerpt from The Beatles' "All You Need Is Love").

To me, this is a simple quote that speaks volumes. We are a society of rushing. Today while driving, I saw a man eating a burger, a teenager texting while driving, and a mom talking on the phone and yelling at her kids in the back - all while attempting to operate her oversized SUV. We don't take the time to stop and look around as much as we should. When I was working and going to school, my mind would race constantly. My anxiety level was pretty high and to be honest, I didn't make enough time to enjoy my surroundings. Since losing my job six weeks ago, I've had more time to stop and look around. I am more observant, more attuned with myself. The thrice weekly panic attacks I suffered from are no longer. I am a happier person who doesn't want to miss out on life.

Today was a good day. Liz and I started week two of our 5K Runner program. I'm not going to lie, the beginning was horrible. We had two days off in a row, which definitely didn't help. By the end, it got easier, but I felt nauseous (I wasn't properly hydrated and skipped breakfast). I spoke with Niko, who is a personal trainer, to see what I should be doing on my off days, so I am excited to add those exercises into my regimen.


Tonight was pretty laid back. I watched a few hours of NCIS and took a field trip to the grocery store for a late night snack:


I have to thank Ainsley from my little artichoke for filling me in on these calorie-laden sugar beasts. She posted a picture on Instagram earlier in the week, and I have been craving them since. The Oreos are pretty delicious, but I don't think they taste much different from the original Oreo. The scent that escapes the bag is mouthwatering. Too bad the flavor wasn't as powerful as the scent. Oh well, I can't complain - it kept me from devouring the whole bag! Before you ask, yes, I ate my cookies and washed them down with Gatorade. Don't knock it til you try it (plus, its not like I dunked them in it)!

*Erin Condren is running a sale = 40% off on 2012 Life Planners + Gift Labels (they both must be purchased in the same transaction) with the coupon code, ILOVEACOMBO. I was really bummed when I saw this, because if I would have waited a few weeks to order my planner, I could have snagged this awesome deal. Hopefully you will put this to good use!
Posted by Unknown at 1:28 AM