When I had walked back to my computer yesterday evening, I had this message flashing at the bottom of Facebook:


This message could not be answered via social network, this required pseudo human interaction. I grabbed my phone, dialed, and when Liz picked up, I was like "What is this about a 5K?' Inquiring minds wanted to know what spurred this out of the blue request.


1. Couch to 5K = 9 week running regimen for those who haven't ran since... ever, I guess? The last time I really ran was when I was late to marching band practice in high school, and I had to do laps around the football field.


2. WCS Run for the Wild at the Bronx Zoo is a 5K that helps raise money for animals. This year, funds will be used to help WCS help animals at the zoo and around the world. The focus this year = the lion.


So, after hearing her out, and taking about thirty seconds to think about it, I said sure, what the hell. I've always wanted to run in some sort of organized event, and accomplishing this before the big 3-0 would be even cooler. We decided that training had to start this weekend, so securing proper running shoes was imperative. Sayville Running Company is a local specialty running store, which I have heard nothing but good things about.


Upon entering the store, a gentleman greeted us and asked what we needed help with. I told him we needed serious help, and told him what we had planned on doing. He told us we were in the right place and told us he would help us find the right pair for our feet. In order to do so, we had to get on a machine that assesses your feet. Unbeknownst to me, I have high arches. After the machine test, I had to walk, with my pants rolled up, so the gentleman could see how I walk. I was told that I was overpronating. I was shown which shoes are the best for my feet. All in less than four minutes.


Seconds after I was shown the shoes that best suited my needs, I had found my dream shoe. Ladies and gentleman, feast your eyes on the ASICS GEL-Noosa Tri 7. 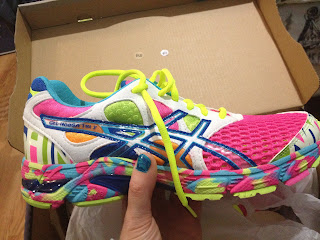 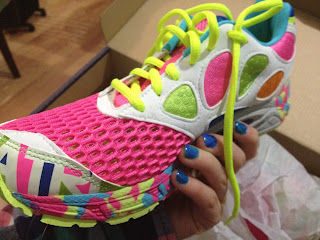 Now, for those who know me, this shoe is an absolute given. I mean, I walked into the store wearing yellow ASICS. I own Doc Martens covered in Sanrio characters. Jeffery Campbell Litas splattered with paint. I like loud, probably because I am loud. Liz smiled and said, "Those shoes are obnoxious, just like you!" While she was teasing me, but there is a bit of truth to that statement. Within fifteen, maaaaybe twenty minutes of walking in the store, we were out the door, new running sneakers in tow. I am stoked beyond repair. How often does a gal have an actual legitimate reason to buy new shoes? I haven't had one in years.

I signed up for the 5K last night. Between now and April, I will be collecting donations for this cause. If you have a few bucks to spare, you can donate on my page. No donation is too small and all are greatly appreciated. If you're broke, but know a family member who likes donating to worthy causes, pass the link onto them! I'm hoping to raise at least $1,500. I know that is a lot of money, but animals need us to use our voices to help them.

Now, onto other things. My obsession with Greek yogurt has gotten even more delicious. I found some local raw wildflower honey while grocery shopping the other day. Tonight, I drizzled some onto 0% Plain Chobani Greek yogurt. 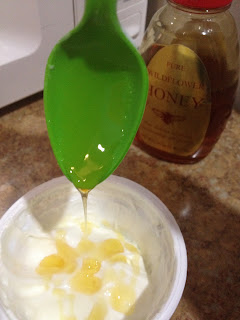 I love this wildflower honey so much, I decided to spread some onto a stoned (yes, stoned) wheat thin. 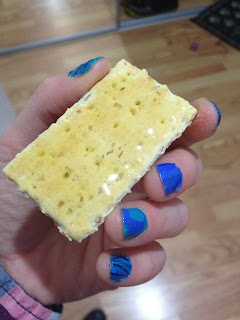 I found out that using locally sourced honey actually helps regarding colds and allergies. It has something to do with the pollen in the area where you live. Not the most technical explanation, but when I read it, it made total sense. Plus, supporting local businesses is one of my favorite ways to give back to the community.

You might also notice those fancy fingers holding onto that honey covered stoned wheat thin. After almost a week with bare nails, I decided to water marble my nails. I stuck to colors that reminded me of the water, which is one of my favorite places to be. 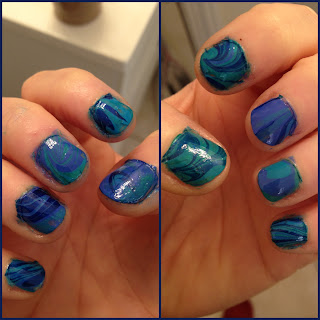 Water marble nails are time consuming, a unique way to paint your nails. YouTube has some great water marble tutorials. I would make one, but there enough videos on the subject. I'll spend my time blogging and preparing for this 5K instead!

May the force be with you,