What a busy week! I was super productive, which is always awesome. The blog got pushed to the wayside, which isn't so awesome. Actually, thats not 100% true - I did behind-the-scenes work on the blog - interviews and whatnot. I also have a list of what I need to do write-ups on, so I just need to play some catch-up. Good thing I take a plethora of pictures throughout the week - I can always pull them up later on, to use in an entry. Enough blabbering - here are a few things I was stoked about this week:

1. Eating Breakfast
Since I started running, I have been more conscious to eat a healthy breakfast. Usually its an iced latter, a piece of fruit, and a cup of yogurt or oatmeal. This week, I tried Chobani 0% dark cherry yogurt for the first time. It was delicious - definitely was not what I was expecting. I know, not the best description, but I ate it five mornings ago, and can't remember exactly what it tastes like. But its good, I know that much! 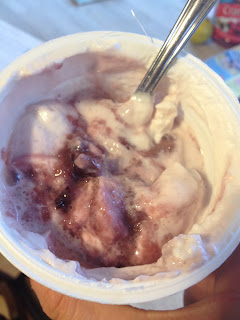 2. Oversized Sweaters
Wearing jackets are a pain, especially while driving. I'd much rather wear an oversized, ultra comfy sweater. This is one of my favorites. Its not the prettiest sweater created, but I like it. I call this my Bill Cosby sweater (if you watched The Cosby Show as a child, you'll remember those jazzy sweaters Cliff Huxtable rocked). 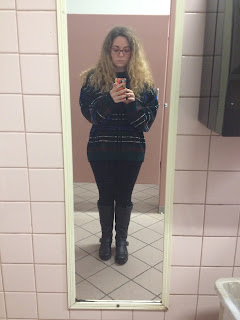 3. Popcorn on Salad
Why haven't I thought of this before? I made a bag of popcorn, and was trying to figure out what to pair it with. I put it aside, and decided to make a salad - needed more veggies in for the day. As I topped my salad with dressing - I looked at the bag of popcorn. Since I can't have croutons (no bread for Lent, remember?), I decided to sprinkle the popcorn on my salad. One of the best gastronomic decisions I made all week. I used microwave popcorn without butter - I chose a natural brand that only contained the kernels, oil and salt. Butter flavoring would probably be overload. 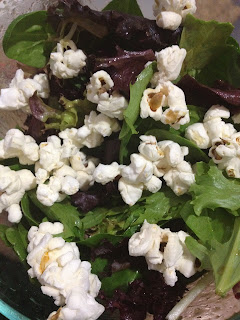 4. Sushi
When it comes to sushi, I am a creature of habit. This week, I decided to try something different. On Wednesday, my mom treated me to sushi and on Saturday, Erich's mom treated me to sushi. Both times, I tried something new. The picture below is the Perfection roll, which I feasted on Saturday afternoon. Avocado, cucumber, crabmeat, salmon, tuna, and yellowtail, wrapped in white seaweed. It was delicious. I plan on trying a new roll each time I go. Variety is the spice of life, right? 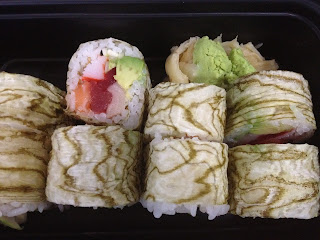 5. Mexican Coca-Cola
For weeks, I have been seeing photos of Mexican Coca-Cola on Instagram. I was curious to see what the fuss was about. Its Coca-Cola, made in Mexico, with cane sugar, not high fructose corn syrup. I rarely have soda, so this was a treat. It was delicious, but still totally unhealthy. I have another bottle in the fridge - I hope Erich drinks it, so I'm not tempted to! Also, check out the radtastic box of tissues behind the bottle - they're so 80s it hurts. 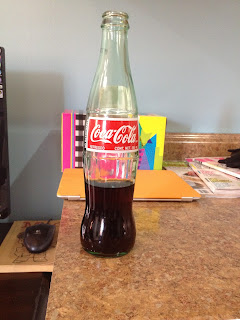