This afternoon, I received a text from my friend, Jessica. She asked if I wanted grab lunch, and of course, I said yes. Because of our schedules, we don't see each other much - usually just for special occasions or a quick bite to eat. I just snagged a tutoring job, so I had a few bucks to spare for an afternoon adventure.

Since the weather was gorgeous, we decided to head into Patchogue for lunch. Patchogue is a quaint little town, not too far from the water. There are a ton of awesome mom and pop restaurants, bars and places to go for sweet treats. Summers are pretty crowded around here, especially during Alive After Five - a chunk of Main Street is closed for bands to play on various stages along the street, vendors to sell their goods, and for the general public to mingle.

We decided to frequent Public House 49 for lunch, a place neither of us had been to before. Since it was early afternoon, we decided to sit at the bar. We were greeted by Kira, a cheerful bartender, and were given menus to peruse. While I checked out the lunch offerings, I took a look around the bar and restaurant. This is a really nice place, why haven't I been here before?


The lunch menu had lots of great items: salads, sides, sliders, and sandwiches. Since I 86ed the bread until Easter, I decided to try the Salad of Baby Lettuce (dressed with pomegranate vinaigrette, dried cranberries and roasted fennel) and a side of Bacon and Onion Mac "n" Cheese. Mac and cheese is one of my favorite foods, and this one sounded superb. Jess ordered the Margherita Flatbread Pizza and the Caesar Salad. While we waited for our food, we caught up on life and enjoyed each others company.

When the food was placed in front of us, our inner fat children cheered in unison. The "side" of mac and cheese I ordered was gigantic, and Jessica's pizza was about the length of my arm! The salad portions were generous, and the presentation of the food was really nice. I went a little picture crazy, but this stuff was so delicious, that I wanted to show it off, in all its glory!

After stuffing ourselves into oblivion, I had Kira wrap half of my goods to go. Jessica housed her entire salad and all but one slice of her pizza - she eats like a beast and stays skinny, its totally unfair. Once we left Public House 49, we decided to get a drink at Roast Coffee and Tea Trading Company, which is a local coffee shop, about three or four shops away.


Roast was more uncharted territory for us. Jessica was actually the one who got me the job at Starbucks almost ten years ago. She is still a slave to the corporate coffee chain, which I don't miss one bit. Walking into Roast was a breath of fresh air for the both of us. Great ambiance, ample space, beautiful artwork and lots of unique items for purchase. 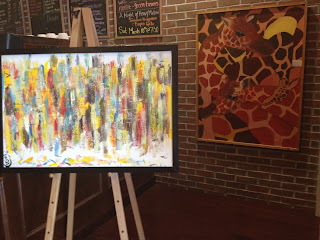 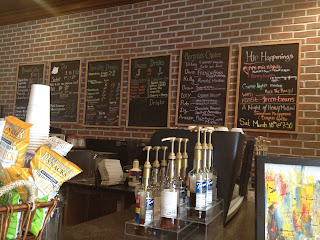 The staff at Roast was exceptional. Since I haven't been to a non-corporate coffee chain since I was in San Francisco a few years back, I was intrigued by their menu, and took some time choosing a beverage. We asked a few questions, and they were very helpful. Jessica chose the Buccaneer tea and a Magic bar (yes, she was still eating, the witch). I ordered a salted caramel iced soy latte for myself, and an iced vanilla latte to bring home to Erich. While I waited for my drinks, one of the employees was conversing with one of their regulars about his decision to cut his hair. The barista commented on his current coif, comparing it to Jimmy Neutron - I couldn't help but laugh. After that happened, I conversed with the both of them - as a former barista, you are used to chatting it up with complete strangers. After that interaction, I remembered how much I liked working with the general public, and actually missed my old job a bit.

The one part of being a barista that I truly miss is the connection with the customers, especially the regulars. Not that I didn't like talking with customers who only frequented the store sporadically, but the banter with regulars is much more laid back. Once you get to know each other, conversations are always amusing, and sometimes, you make new friends. Or even snag a date! Believe it or not, I actually wrote my phone number on a customer's cup a few years back. Gutsy, I know. Especially when you have to hand the drink off and act totally casual about it (that's the hardest part). Within an hour I received a text, and I wound up dating the guy for a few months. 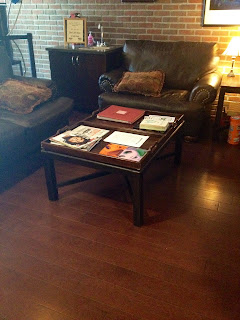 After I snapped a few pictures, I told the guy good luck with his haircut, said goodbye and headed to our cars. Jessica, being the ham that she is, wanted me to include her in my blog, so before we parted ways, I snapped a picture of her, tea in hand, being a weirdo. 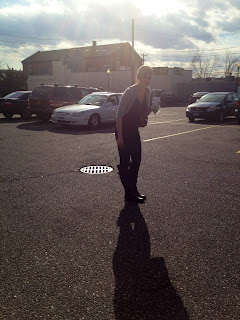 When I uploaded this picture, I couldn't help but laugh - this is Jessica, in a nutshell. Over the last ten years, we have had countless adventures - along with countless disasters. These days, our adventures are a bit more laid back, but we still manage to laugh like a couple of loons. I wouldn't trade that for the world.

Want to find out a bit more about the places I explored?
You can find Roast on Facebook and Twitter.
Public House 49 can also be found on Facebook.
Posted by Unknown at 8:28 PM