This week was pretty out of the ordinary, to say the least. More hectic than normal, but in a good sense. I didn't run as much as I wanted to (only ran Tuesday, but running tonight), but I was rather active throughout the week. Here are a few things that made this week worthwhile.

01. Sokenbicha Revive
After running on Tuesday, I had to go to class. I didn't have time to stop anywhere en route, so I hit up the school cafeteria. My school has such an array of items, and the ladies make the best grilled cheese sandwiches (the week after Easter, I am definitely feasting on one after running). I wanted something besides water to quench my thirst. Oolong tea, black tea, rose petals rose hips, and ginseng? I knew this was up my alley. Once I got into class, I took a quick sip, and was hooked. I finished the bottle within thirty minutes, and actually walked out of class to buy another one. When I was downstairs, I asked if I could buy a case, because Whole Foods is the only place that carries this, and I didn't want to drive 40 or so minutes for tea, if I could snag it on campus. Long story short, in order to get me through Spring Break, the cafeteria manager sold it to me for just above cost. They're actually discontinuing this brand on campus, but since they know I'll be purchasing Revive, they are going to keep it stocked for me. So awesome. Another simple reason why my school rules. 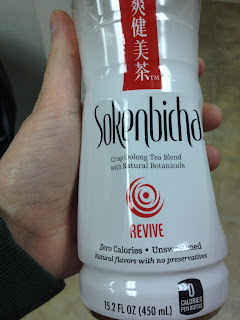 02. Nail Art
I used to paint my nails twice a week, but with school, side projects and what-not, my nails weren't the top of my priorities list. I took some time on Friday, to tend to my digits. I used Color Club Age of Aquarius, and topped it with a few glitters. The tips are donned with Essie Luxeffects A Cut Above (varying sizes of pink glitter) and Set In Stones (same style as A Cut Above, but in silver). After I let the tips dry, I applied Essie Pure Pearlfection, which is a fine white shimmer, that just makes the color pop, without overpowering the polish. 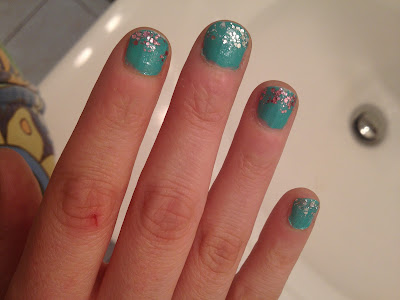 03. The Kittens
In less than a month, our babies will be turning one! Time flies, and they've grown so much. When we found them on May 21, Puar weighed 15.1 ounces and Penelope weighed 14.2 ounces. When I weighed them this morning, they weight 14.2 pounds and 13 pounds, respectively. Even though they have gotten huge, they still crawl into my lap and on my chest, just like they did when they were tiny, orphaned babies. Erich and I have raised them since they were three weeks old, so we are their parents. Its also amusing at how human they think they are sometimes. Penny tries to drink out of water bottles and can open doors now. 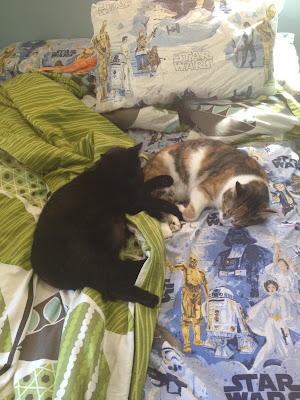 04. Pandora - Brand New Radio
Brand New is one of my favorite bands, and they just so happen to be from Long Island. Anytime I put this station on when I use Pandora, a solid mix is guaranteed. While driving to meet up with a friend, Taking Back Sunday's Cute Without The 'E' came on, and I was super stoked. Tell All Your Friends is the only TBS album that I can listen to, from start to finish. I have a plethora of memories connected to this album, which, as of March 26, is ten years old. Once I heard this, I knew the day was going to be fantastic, and it really was! 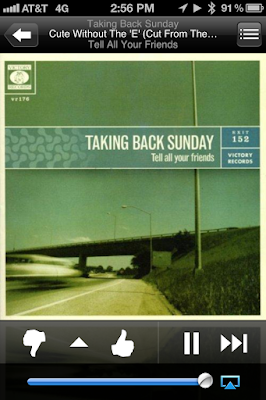 05. Curry Kebob House
After I helped a friend with a party, I met up with my mom at Starbucks. We decided to try an Indian restaurant that one of her school instructors works at, in Medford. My mom had never eaten Indian/Pakistani cuisine before, so I was excited for her. Her instructor, Christine, is so nice. She suggested Weight Watchers friendly food, plus some other indulgences. We chose Chicken Tikka (pictured below) and Paneer Jalfrezi. This was the best Indian food I have ever had. Fresh, flavorful, and made with great care. We met the owner and his wife, who both share the cooking duties. They care about their customers and their staff - Christine said they're her second family. The prices were great, the atmosphere was just right, and it was a great way to spend a Friday night with my momma. 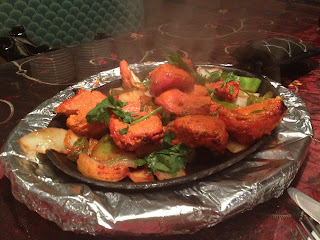 I ate a lot of food, probably more than I should have, but I wasn't worried. I had been eating pretty well most of the week, and the feast we had last night was well worth it! I weighed myself today and I lost 1.2 pounds this week (3.2 pounds in three weeks - not bad), so I must be doing something right. Its strange counting points, as opposed to calories. I used to try and stay under 1,100 calories a day, but I definitely was not eating balanced meals. With my points, the fat, carbs, fiber and protein are taken into account. I am eating more food, but I am more satisfied. When I counted calories, I would often feel unfulfilled, then binge. I never thought I would say this, but the Weight Watchers program has changed the way I view food, even only after a few weeks. I have been making more healthful, mindful food choices.

Spring break has officially begun for me, and I am really excited. I am hoping to get some photos done for the blog, and get more entries in. The next contest is ready to go, and will be up next week. The year that was looking terrible back in January is looking pretty promising now.
Posted by Unknown at 2:40 PM