Last week, I got lots of fun stuff in the mail. Postcards and letters from pen pals, fancy postcards to send to said pen pals, and a boatload of nut butters from Artisana. I have purchased their cashew butter and Cacao Bliss in the past and loved it, but had not tried many of their other products. They graciously sent me over lots of goodies to try. 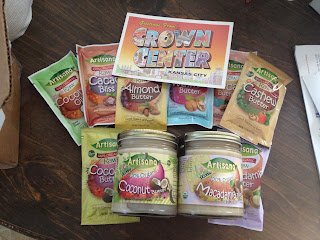 Now, I have had ample time to try all of the nut butters they sent me. I picked up a slew of apples and bananas to snack on at work. Between phone calls, I would squeeze a bit on my fruit and take a bite. Super convenient and not messy whatsoever. I really liked their almond butter, and really dug the macadamia butter - it has teeny tiny bits of macadamia nuts in it, which made the texture awesome. I didn't dislike the pecan or walnut butters, but they weren't my favorite of the bunch. I've never really been a fan of either nut, which probably has to do with this. When I was younger, we would have mixed nuts in a wooden bowl on the table. The pecans and walnuts were always my least favorite. Apparently, not much has changed over the years. So, if you like walnuts and pecans, I have a feeling you will like the pecan and walnut butter.

I used the coconut oil as a moisturizer on my arms and legs after my shower, and it worked wonders. No, this isn't the first time I've done this. If you haven't tried this, I suggest you do (unless you're allergic, then stay away). Next trip I take, I will definitely grab a few of these packets for travel - I wouldn't dare take my jar of coconut oil with me. With my luck, I wouldn't close the jar completely, and it would be a disaster, to say the least. I ate the Cacao Bliss straight out of the package, because its just that delicious.

Step one: mix your coconut butter - make sure its not separated. Like natural peanut butter, this will also have naturally occurring separation of oil and solids. 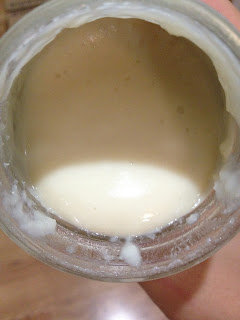 Step two: chop your chocolate. I chose this chocolate because I figured the sea salt would be a nice touch to the sweetness, and I was so right. Its not strong, but it adds a nice depth to the flavors. You can use whatever chocolate you have on hand. I'm sure it will be delicious any way you make it! 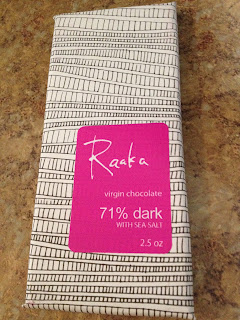 Step three: put a few bits of chocolate into the bottom of your mold. Scoop a bit of coconut butter into your ice cube tray or candy mold. Make sure to tap the tray or mold lightly (I stress lightly, because you don't want to make a mess - can you tell I've been down this road before?), so remove air bubbles. Place a few pieces of chocolate on the coconut butter. Finish filling the mold with coconut butter, and sprinkle a bit more chocolate on the top. You don't have to put a lot of chocolate, unless you want to. I just put a pinch each time, because I wanted to incorporate it, without mixing it in with a spoon. 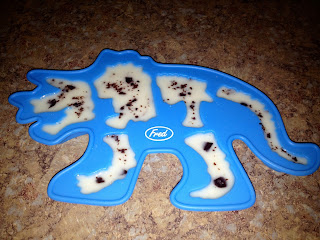 Step four: place your tray/mold in the freezer for about ten minutes. Remove and toss in the fridge until you're ready to pop the candies out. I left mine in for about thirty minutes, then transferred them into a wooden bowl. They've been in there for a couple days, and they still taste delicious. I used one of my awesome dinosaur ice cube trays to make these fun, but as I mentioned before, use whatever you have lying around. 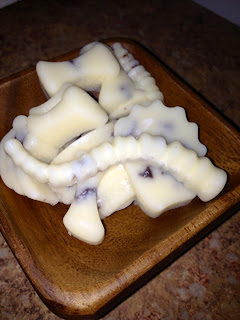 My first experience with coconut butter was yummy. If any of you have ways to use your coconut butter in the kitchen, let me know! I'd love to experiment with the rest of the jar!
Posted by Unknown at 11:55 PM