For the last week, my friend Jess has been trying to coordinate plans with me. We finally aligned our schedules and had a late lunch today. Seeing as our money trees slowed down on production lately, we wanted to get something that would be filling, but not wallet-draining. I have often heard friends of mine speak of the amazing sandwiches made at The Portly Villager, which is a local pub, located in Sayville. We decided to try it out. After all, you really can't go wrong with a sandwich.

Upon entering The Portly (this is what the locals refer to the pub as), we realized we were the only females in the room. Heck, we were the only people under the age of forty in the room. Not that we minded this, or that they minded us. The men were at the bar, eating and drinking, watching the Olympics and conversing. Nothing rowdy, no one being belligerent, people just spending time together. The gentleman tending bar told us to have a seat wherever we liked. Once we pulled up a chair, he asked us if we had been before. Jess had come for a drink one night, but never ordered food. He presented us with a menu, a card, and a pencil. This was going to be fun. 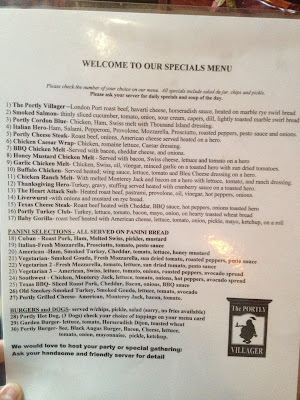 The specials menu lists thirty specialty sandwiches The Portly offers. This is all they have, but they do it well. On certain days, they offer soup or chili. They were serving gazpacho, but we decided to skip it and go for the sandwiches. Now, for the card. What you do is check off which number sandwich you'd like. If there is something else you want, have no fear. The card has a create your own sandwich checklist. Best part of this? Every sandwich is $10, no matter what you order. This also includes your tax, which I think is much easier, especially when tipping. I think its a pain for waitstaff to receive a tip that requires them to carry change in their pocket. As if they don't have enough to carry around. 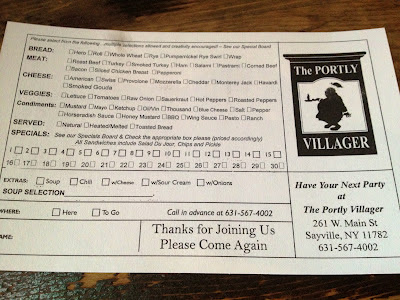 Jess and I decided to split our sandwiches, so we could try a couple different options. We chose the Portly Cheese Steak and the Southwest Panini. After we handed in our cards, we were given a basket of popcorn. Not bad, huh? 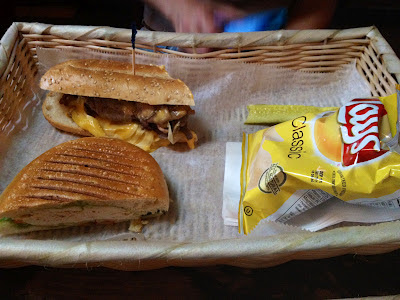 Within fifteen minutes, our sandwiches came out in these nice baskets. The cook knew we were sharing our treats, so he split them up for us. The sandwiches came with chips, homemade coleslaw, and a pickle. Perfect sandwich pairings. Our sandwiches were insanely delicious. I can't say I have a favorite, seeing as they are both so different. Since E was working, I ordered him a Cuban panini to go. I knew later on that night, I'd sneak a bite of his to see how it was. I did, and it was heavenly. 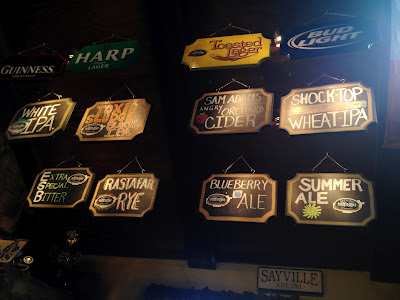 I didn't have a beer, seeing as I don't like drinking and driving (my father instilled fear in me at a very young age regarding this), but I was thrilled to see the pub boasting half a dozen Blue Point Brewing Company selections on tap. This is what I love about my area - local businesses are always working together and carrying each others products. I can't name one local place I frequent that doesn't offer something created by another local business. 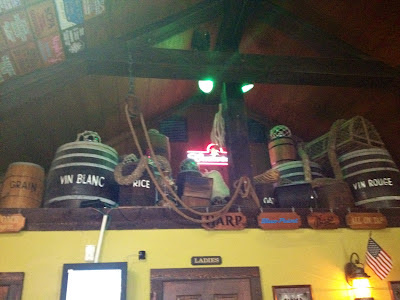 I couldn't eat all of my food, so I brought home something to nibble on for a late dinner. I also grabbed a card to go, so I could show Erich what they offer. Sandwiches are served til 10pm Saturday - Thursday, and til 11pm on Friday. This is perfect for nights when we want a late snack, or when I'm too lazy to cook before work - I can call a sandwich in the night before. I'm really looking forward to visiting The Portly Villager again, next time, I'm creating my own masterpiece!
Posted by Unknown at 10:19 PM