On Saturday morning, I woke up a bit after 4a, to head over to my mom's house to get ready for our first 5k. I wanted to make sure I had some caffeine, food and water in me before I ran, so thats why I had a 4a wake up call. We left at 6, and made it to the Bronx Zoo a little after 7. Parking was a breeze, and we milled around outside the start line at the morning festivities. There was face painting, breakfast, and a bunch of participants just hanging out. 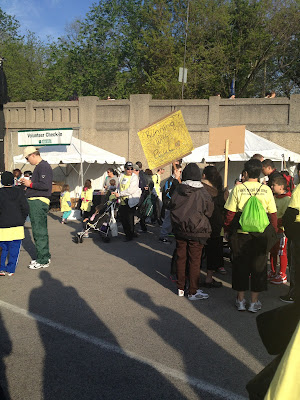 While we waited for Erich (he drove separately, because he didn't need to be there super early), we got our faces painted. The lady used neon colors, just like my sneakers, so I matched. She went all out, and I definitely stood out. When I saw Erich, I waved to get his attention. He didn't even recognize me!

I was super nervous about running, so instead of doing the regular 5K, I participated in the Family Run/Walk 5K, because you were able to run at your own pace. I figured that it would be less stressful, because I wouldn't be the last one crossing the line. In reality, I should have done the regular 5K. There were so many people with strollers! I had to sprint past them all in the beginning, which was not the brightest idea, because it threw my pace off for the rest of the race. Something else that surprised me? The hills! Not that show with LC and Heidi, but terrain that I've never tried running on before. They weren't gigantic, but they were big enough to make my legs hurt. I had to stop a few times to rest my legs and regulate my breathing, which I was alright with. At one point, I was jogging behind this girl who just STOPPED running out of nowhere and came to a complete standstill to show her friend something, so I had to think fast and jet from behind her. Thankfully I didn't get in anyone else's path, because that could have been disastrous. I finished the race in 36 minutes, which isn't horrible, but its not fantastic, either. It was a learning experience, for sure. Don't start off too quickly and don't run when strollers are present, ha!


After the run was over we hung out for a little bit, then headed home. I showered and took a nap, then headed out for girls night with Liz and Irene. Liz and I said months ago that we were going to pig out the night after the race, and we did! We headed over to KB's Burger Shack for our feast. We split bacon cheeseburger skins and I ordered a breakfast burger (a burger topped with bacon, cheese and an egg) with Texas fries, which had cheese and jalapeños. I only ate my fries and 1/4 of my burger, because I was stuffed. I brought the rest home for the boy.
After I got home from dinner, I realized we were out of kitty litter, so we ran up to the grocery store. While I was there, I checked to see if they had Ben and Jerry's Chocolate Therapy, because I had been craving it for a week. Finally, I found it! I had some when I came home, then passed out. I slept for ten hours, and woke up feeling refreshed.


Now that my first 5K is out of the way, I am looking forward to my next one. My friend, Tara, mentioned a lock 5K this June, which I want to run in. Plus,  The Color Run in August. Once I can manage a time under 30 minutes, I will start training for a 10K!
Posted by Unknown at 6:46 PM