Following in My Father's Footsteps.

The summer after I graduated high school, a former flame told me that I would turn out to be exactly like my mother. I scoffed, telling him he had no clue what he was talking about. Twelve years later, and some self-reflection along the way, he is right - to a degree. I will catch myself saying or doing something, and say, "Ugh, I am turning into my mother." I don't mean that negatively at all, its just that I've always said, "I'll never turn out like my parents," which is a laughable statement now. I've picked up habits from my mother, but the ones that are usually unnoticed or not mentioned are those of my father.


My dad and I have a unique relationship. I have so many vivid memories of him from my early childhood. Apple picking, dancing in the kitchen, eating ice cream, and watching The Muppet Show. I don't remember when it was, but I remember him calling the house, when Stevie Wonder's "I Just Called To Say I Love You" was on the radio, so he could sing it to me. Once I was in elementary school, I saw mom more than I saw dad - he was working, and mom volunteered at my school. By middle school, I was locking myself in my room, blasting the local alternative station, and ignoring my parental units as much as humanly possible.

By the time I got to high school, we developed a better relationship. It was never strained, but I wasn't his little girl anymore, and conversations were usually about school, marching band, or about how I needed to stop turning to dryer on to get the wrinkles out of my clothes. My dad would wake me up for school (twice, because I wouldn't get up the first time), iron my clothes if they needed pressing, then drive me to school. En route, he would stop to get me breakfast - bagel and a cappuccino. I was beyond spoiled and didn't even realize it. After football games (I was a marching band geek - I was forced to be at the games, only to watch our miserable football team lose nearly every game), my whole family would often go out to Applebee's, Chili's or Pizza Hut, along with a plethora of other band students and parents. He and my mom chaperoned at most of the time - even for away games, and my poor little brother was dragged along for the ride. If it was a home game and I was too tired/antisocial, my dad would make a food stop for me - nine times out of ten it was for a Nachos Bell Grande, with extra sour cream.

Yeah, I had it made in the shade, folks.

As I have gotten older, I have a greater respect for my parents. They are human, flaws and all - just like me. They also have quirks, which takes me to the reason for writing this. I have developed habits that definitely make me my father's daughter.

Whenever I listen to Billy Joel in the car or on my iPod, I almost always put on songs that my dad used to sing in the car. Music was also something we bonded over on those morning car rides. I can vividly remember him singing "She's Always A Woman," staying on pitch the entire song. My grandfather could sing and dance like a champ, so I guess this shouldn't have come as a surprise. When I put on Abbey Road, I go to "Maxwell's Silver Hammer" first, as this is my favorite song on the album. Out of nowhere one day, I asked my brother what Beatles song reminded him of dad, and without hesitation, he said "Maxwell's Silver Hammer."

Besides music and other little quirks that are my father, this last one would make him smile. Last year, I bought a pair of TOMS, which he would say are overpriced - even if they do give children in foreign countries footwear. Anyway, a few months into wearing them, I noticed that when I would wear them around the house, I was folding them down in the back. My dad did the SAME THING with every single pair of his slippers. He never purchased backless (?) slippers; he always got plaid loafer looking ones, that were supposed to cover his heel. As soon as he would get them, he would fold the heel in, and proceed to wear them until he wore them out.

When I wear my TOMS with jeans or shorts, I fold them back up to wear in public, but they feel weird. I know it sounds crazy, but they are so much more comfortable with the backs folded down. My dad was onto something with those slippers of his. I'll call my dad tomorrow, while he is driving home from work, and tell him about my shoes. Its funny, I just realized that most of our conversations take place while we are both driving. Guess those years of talking in the car still exist. 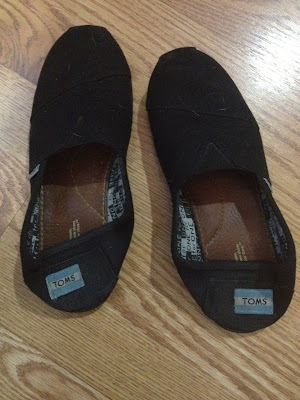