May Angels Lead You In.

Throughout the week, I have been thinking about what I would write in this post. Where do I start? How should I phrase this? What if I forget something important? Last night, I decided I would wing it. This might not make sense to you at the moment, but once you reach the end, you will see why putting this post together was so important to me.

When I was younger, I was informed that my Aunt Anita, Uncle John, Aunt Angie and Joe-Joe were not actually related to me. I don't remember how old I was, or what spawned the topic of conversation. What I remember taking from that conversation was that just because they weren't blood relatives didn't mean they weren't my family. The unbreakable bond that holds us together is love.

When I was around the age of two, I tripped on our carpet and landed on the edge of the brick fireplace, gashing the area next to my eyebrow and part of my eyelid. Panic-stricken, my mother got ahold of Aunt Anita, who lived across the street. She rushed us to the pediatrician, then the hospital, where I got my stitches, courtesy of some plastic surgeon. Aunt Anita was there on my first day of kindergarten, as I boarded the bus and waved goodbye to my mother, who was witnessing one of the many milestones her baby girl would achieve. Oh, I should also mention that she was the one who arranged my mother's baby shower, while I was safely nestled in the womb, enjoying copious amounts of Carvel's chocolate soft serve ice cream - mom's favorite at the time. I could tell you stories for hours, but you get the idea - she's amazing, and she's my aunt.

Last Sunday, I called my mother. She was panicky, and was telling me she had to go, she was on the phone with Aunt Angie. I was worried, so I spoke with her firmly, and asked what was wrong. I wanted to make sure everything was okay. Everything was far from okay. My fourteen year old cousin, Dominic, had died. An accident on the jet ski. I froze, and told her to call me back. I knew the phone call on the other line was more important. As soon as I hung up the phone, I ran to my closet to put a proper change of clothes on. I didn't know where I would be going, but I knew that I wanted to be with my mom. I called Erich's job in a panic, telling him what I knew, and that I was going to my mom's. Before I walked out of the door, my mom had told me to just go to my Aunt Anita's house, she would meet me there.

As I arrived at the house, I had my sunglasses on, to hide my tears. Joe-Joe (I just call him Joe now) was outside with a few other relatives, and with Dominic's younger brother, John. I walked over, said hello quietly, and little John started talking to me about the ants on the walkway. I kneeled down, trying to hold back my tears, and explained about the ant hill, and told him to watch the ants walking through the cracks of the sidewalk. Matter-of-factly, he told me that this wasn't a sidewalk, it wasn't close to the street. At the tender age of three and a half, he corrected me. I said, you're right - this is a walkway, not a sidewalk. We looked at the flowers outside for a bit, then he grabbed my hand, and asked me to push him on the swings.

As I walked into the backyard and put him on the swing, I told him that when I was little, his grandma and grandpa had a swing set for us to play on. He said, "When you were three?" I smiled, for the first time in hours and said, "When I was three." He smiled, and seemed to be amazed that at one point, I too, had been three. I don't know how it happened, but I saw the back screen door slide open, and out came two of his cousins and his younger sister. I guess one of the adults heard me in the backyard, and knew they would be safe with me. I looked at all of their faces, realizing how much they had grown. With work, life, and everything else that had come up, I didn't see them often at all. I knew from that very moment, that I needed to be present in their lives.

When the skies became darker, I led the little ones inside and took them downstairs to the basement, which has been a play room for as long as I could remember. Many of the toys I played with were there, and I had a strong sense of nostalgia. I also thought of Dom immediately. When Dom's grandfather had passed away a few years ago, many of us retreated to the basement, just as we had when we were younger. Dom and I had formed a special bond at that time. When we were at the wake, he and I sat outside the room and talked. School, music, sports, food - we talked for hours. I also told him that I would take him to go see the new Miley Cyrus movie, Hannah Montana & Miley Cyrus: Best of Both Worlds Concert, just as long as his parents were okay with it. We had a blast at the movie, and I am so glad that we got to have the experience. As he got older, and grew out of this phase, I would often ask him how Miley was doing. He would make a face at me, and we would both smile. He knew I meant well, but I couldn't resist teasing him!

Whenever I had free time throughout the week, I made sure I was at my aunt's house to help out. I spent most of my time with the little ones, playing in the basement, along with help from other adults in the house. I told them each night that I was there, that we would have a pajama party in the basement. I figured with all of the chaos going on, I'd try to make this as positive as I could for the little ones. Going home at night was rough. Everything I held in during the day became uncorked when I came home. I would watch the news, think about things, and would search for songs for Dom. I don't know what I would have done without Erich. He held me as I cried, listened to my stories about Dom, and rubbed my back when I was having trouble sleeping.

Erich and I attended the wake in the afternoon, because he had to work that night, and I was watching the little ones that night. As soon as I walked into the room, it really hit me. This was really happening. My cousin Lisa must have seen the look in my eyes, because she came right over to me and hugged me. I broke down in her arms. As she held me, she told me that since I had been so strong and so busy, it was finally real to me. She was right. As I knelt in front of my cousin, I prayed to God to make sure he took care of him and made sure he was safe. I told Dom that I loved him so much, and that I missed him terribly. I told him that I was helping with the little ones, and that I would make sure to be there for them. At the evening portion of the wake, over 1,000 people came, waiting in line for hours to pay their respects, and to share stories of Dom. At the young age of fourteen, he touched so many lives.

The following day was sad, but we were all together as a family. In the church, Lisa's son Matthew wanted to sit in my lap, and I started to cry as I held him. I told him that I loved him, and he hugged me back, and said, "I love you too, Shelly." Those beautiful babies, my gosh. If it weren't for them, I honestly don't know how I would have gotten through the week. In a time of sadness, I was also surrounded by love and joy. The little hugs, sloppy kisses, and calls for "Micheley," to either bring them upstairs to go potty, or to get them a cookie - they were truly my saving grace this week. Dominic's cousin Vincent also led his cousins to the altar, while he gave a wonderful speech they had prepared the night before. It was funny, heartwarming and beautiful - just like Dominic. How blessed we were to have him in our lives!

My mother wrote a poem that brought comfort to me, and I would like to share it.

I asked God, God why did you take Dom from us so soon. Such a young soul with so many things left to do. So many dreams still undone. God, how will we get through this pain, the emptiness in your heart, the darkness in our world. He was our joy, our laughter, our shining star that lights our world. God told me, “Dom had a wonderful life here on earth and his work here on earth is done. I have important work for Dom here in heaven that cannot wait. You have seen how he has touched so many lives here on earth, well here in heaven he will be able to reach so many more souls that need his tender touch, his joy, his love. He will light the way for others in need.”But God we love him, we miss him. What are we to do without him? God laughed at me and said “Look around you, his sprit is all around you. He will live on through all of you, through the memories you share. Do not cry for he is safe and happy to be here with me. You will all see him again when the time is right.”- cg

Although I am still sad, I have made it a point to smile, laugh and find the beauty in life this week - after all, that is what Dom would want me to do. Friday night at dinner, I laughed so hard, and truly enjoyed myself for the first time in a week. I have a great story from dinner, involving my uncle and a biscuit, but i'll save that for another day. It was a memory made and Dom definitely would have found it amusing. 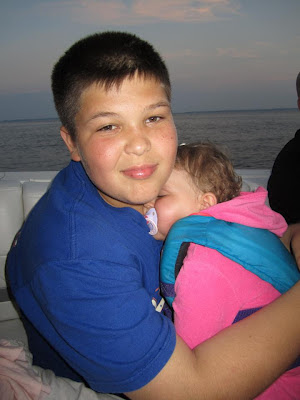