A few months back, I was flipping through the channels and stumbled upon Dr. Oz. I've watched him on and off for years, and I adore him. He's so nice and his smile and positive attitude are contagious! At the moment I began watching, he was telling a viewer about an alternative to coffee. I was curious, because decaf coffee freaks me out. Why? I'll explain.

Did you know that most coffee companies, including your beloved Starbucks, use a chemical process to remove the caffeine? There is an alternative Swiss water process which can be utilized, but its pricier and more time consuming (fun fact I learned: when you use the Swiss water process to remove caffeine, it produces green coffee extract, which Starbucks is now using in their new line of Refreshers). So, needless to say, I avoid decaf coffee like the plague.

Now, the coffee alternative Dr. Oz shared is called Teeccino. Its a caffeine-free herbal coffee. Herbal coffee? Hmmm... I was skeptical, and went to the website to read ingredients. All natural ingredients, mostly organic (some are 75%, some are 100% - depends on the product), and fancy flavors. I wanted to give Teeccino a spin! I inquired about the products, and Teeccino said they would send a few samples over to me. Awesome. Well, when the package arrived, it much bigger than I had expected. 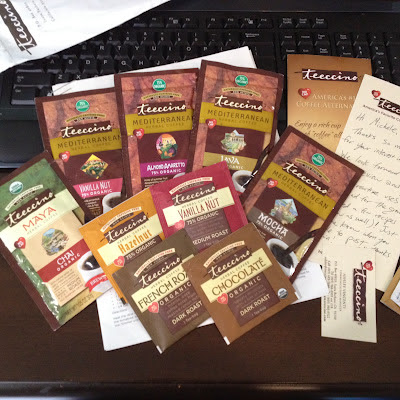 They sent me Teeccino in two forms - tea bags + ground for all-purpose coffee pots. Since I haven't had a chance to get through all of the Teeccino yet (cutting caffeine back has been a grueling process, but I'm doing it, slowly but surely), but I got to sample the tea bags, so I can give some feedback on those thus far. The four tea bags I received were Chocolate, French Roast, Hazelnut and Vanilla Nut. If you have a nut allergy, do not, I repeat, do not drink the ones with the nuts. As I always say, read the package beforehand. 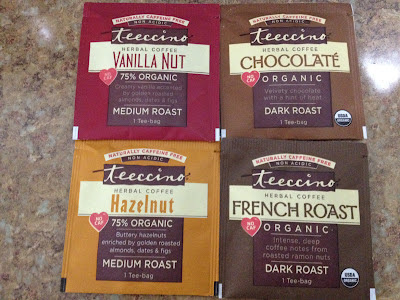 So, the first flavor of Teeccino that I tried was the Chocolate. I was surprised at how much it actually smelled like chocolate. When I sipped it black, it wasn't bad, but working for Starbucks for ten years gave me a serious coffee tasting palate. I knew that I would enjoy this with some sort of creamer. I used  bit of a sweetened cashew creamer, and it was delicious. I tried the French Roast, which was better than regular french roast coffee. I hate French Roast in coffee form, but could drink this. Again, tasted better with a sweetened milk product.


I finally put my finger on what Teeccino tastes like - flavored pods for my Keurig (which hasn't been used in about a year now)! They flavor is enhanced by adding a drop of sweetener and creamer. Or, a sweetened creamer, which I prefer - all natural, of course. My favorites were the Hazelnut and Vanilla Nut. I am actually enjoying a cup of the Vanilla Nut right now. We are out of my regular creamer, so I used a splash of Erich's favorite - Horizon Organic Lowfat Chocolate Milk. I must admit, it tastes amazing. I try to avoid dairy, but it was only a tablespoon, nothing crazy. Definitely enhanced the flavors and added some body to the beverage.


So, what is the consensus of this coffee snob? Teeccino is the way to go, when it comes to the realm of decaffeinated beverages. My favorite is the Vanilla Nut, but if you have nut allergies, steer clear. You can snag Teeccino at your local Whole Foods, or you can order straight from their site. They are running a special on their Sampler Pack, exclusively through Facebook. If you "like" Teeccino, you can order the Sampler Pack for $10.99, including shipping, through the provided link. Like them here and click on Special Offers tab. Trust me, its worth it - even if you keep it in the house for guests who prefer decaffeinated brews.


Next month I will be reviewing the ground flavors of Teeccino I received. I plan on testing out some iced coffee, along with some sweet treats. Are there any sweet treats you would like to see me make with Teeccino? Suggestions are welcomed!